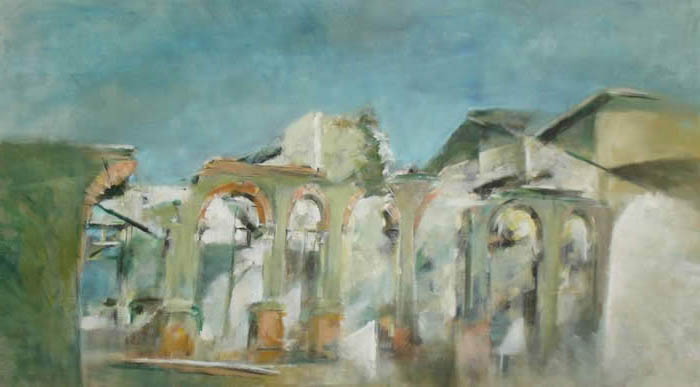 Chong Choon Woon’s Profile: Born in Johor in 1972, Chong Choon Woon is a Malaysian fine artist who is known to many also as a ‘China’ artist. His early art education came when he graduated from the Malaysian Institute of Art where he then continued on to the China National Academy of Art. Choon Woon graduated from the Nanjing Normal University in China with a Bachelor in Arts. His works is known to have been widely inspired from that of the French Impressionists where he has said to have been influenced by Alberto Giacometti, a Swiss surrealist sculptor and painter.

His techniques are known to have used bold sweeps of the Chinese strokes because of his education from the Chinese art scene. Hence, one can find his work to be a fusion of Chinese techniques with the likes of European impressions. It is not always that one gets to see how such techniques can be so articulately translated into a painting the way that Choon Woon has. Hence, such unique traits have brought Choon Woon’s art not only in Malaysia but he has also garnered awards while some of his work has also traveled the world over with a lot of prominence been given especially in the China market.

Chong Choon Woon’s unique way of painting and trademark body of work has given him the opportunity to be an expert in his field. As he studied in China, that was where his art career took flight so much so that he previously won the Oil Painting winner of Excellence Award from Shanghai Art Museum, one of the most prestigious art museums in the world. His works have been exhibited in most public and private galleries not only in Malaysia and China but also in many other countries while they are also in some of the permanent collections of corporations like Berjaya, Prudential and Siemens.

Apart from producing art, Choon Woon is also actively involved with art education where he has been a lecturer at that Nanyang Academy of Fine Art in Singapore, the Nanjing Normal University & Art College in China as well as a visiting professor at the Yuen Zhe University in Taiwan. He has held numerous solo exhibitions with the prestigious Wei-Ling Gallery in Kuala Lumpur like the “Look and you will See” show, the “Urban Perceptions” show and the View of Nanjing show. Apart from that, he had also held a solo exhibition at the Taipei Cultural Center in Taiwan entitled ‘Circumstances’.