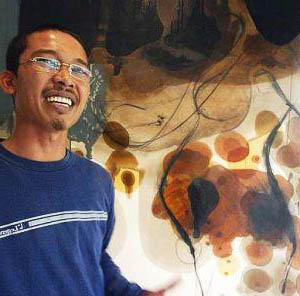 Hamidi Abdul Hadi’s Profile: Hamidi Abdul Hadi is a Malay artist who was born in 1971. His work is often seen as abstract and a ‘confusing’ state of expression that requires the viewer to observe and understand. Hamidi’s body of work is perceived to be edgy as they dwell with social issues and such while some even called them ‘disturbing’. Apart from winning awards and accolades, Hamidi is actively involved with the art movement of Malaysia where his works have been exhibited in most major art spaces in the country. Apart from being one of the previous Top 5 winners of the prestigious Philip Morris Asean Art Awards, he has also held solo and group exhibitions with established galleries in Malaysia, thereby cementing his place among the new generation of fine artists of the country.

Hamidi Abdul Hadi holds a very impressive list of awards as a fine artist. His artwork has received Special Mention at the 2004 Kijang Award by Bank Negara Malaysia while the same here saw him emerging as one of the finalists in the Young and Contemporary Art Award organized by the National Art Gallery. He was also one of the top 5 winners of the Philip Morris Asean Art Award in 2000. Other awards include being selected in the Singapore’s ASEAN Art Award as well as receiving Honourable Mention at the 1996 edition of Philip Morris.

Hamidi has held various solo exhibitions with Wei-Ling Gallery that include ‘Timang-Timang’ in 2009, ‘Alun’ in 2007 and ‘Indelible Markings’ in 2005. Other notable group shows include the ‘Art Triangle Malaysia-Philippines-Indonesia’ show organized by Soka Gakkai, Kuala Lumpur and the ‘Force of Nature’ show by Darling Muse Gallery. Apart from that, his works have also been exhibited at the Novas Gallery in Liverpool, United Kingdom at the “TENGGARA – Recent Paintings from Malaysia, Indonesia & Philippines” show, the “23rd Asian International Art Exhibition” at the University Art Museum Guangzhou in China, the “9th International Seminar & Art Exhibition” show at the Srinakharinwirot University of Bangkok in Thailand and many others.