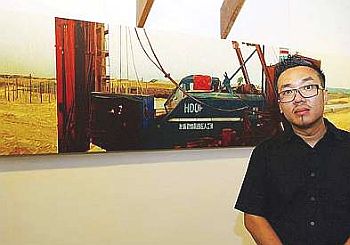 Ivan Lam is perhaps one of the most popular contemporary Malaysian artist in recent times. Started off with a Certificate in Graphic Design in Limkokwing Institute of Technology in 1994, he would continue to study the techniques of fine art at the Maine College where he graduated with a Bachelor of Fine Arts in Painting in 1998. After that, he would continue to pursue his MA in International Contemporary Art and Design Practice with the University of East London when he was attached as a Program Leader in Limkokwing University of Creative Technology. Since returning from the United States, Ivan has relentlessly establishing and inventing himself to become the epitome of Malaysian pop art where his work has been exhibited in various private and public galleries in Malaysia and abroad while he has also won awards for his creative works. On top of that, Ivan is one of the few artists who are ‘sponsored’ by a paint company where he uses them for his paintings.

Ivan Lam started in the Malaysian art scene as an edgy and new artist where he showcased alternative art form. Such is the case of his ‘Lightbox’ series which despite receiving positive reviews were considered to be less commercial. Hence, he ventured into silk screen print making art where he perfected. His solo exhibitions include that with Galeri Taksu while he is recently attached with Wei-Ling Gallery, Kuala Lumpur.

His work is also included in the permanent collections of the National Art Gallery as well as with Galeri Petronas in Suria KLCC. As one of the most popular artists currently, his work has also travelled across the borders where one was auctioned at the renowned Christie’s South East Asia Art Auction in Hong Kong in 2008. In 2006, his work was auctioned off at the Larasati Art Auction in Singapore. Ivan was also one of the Main prize winner of the Philip Morris ASEAN Art Awards.