Known to be one of the masters in watercolour art, Yeong Seak Ling is a self-taught artist who is also known for his body of art that encompasses acrylic and oil paintings. His passion for art started in his early schooling years where he was one of the youngest artists to win the Major Award in the Salon Malaysian Art Competition then. Yeong is one of the founding members of the earliest contemporary art groups in the 1970s called the ‘Utara Art Group’ and he will continue to be actively involved with such movements where he founded the ArtGrup Penang in 2003 in which he is currently the president.

Yeong’s earlier works were known to be in abstract art where used to paint on 8 foot canvases using an innovative technique in watercolours. His works were exemplary and this was when he won the major awards for the Malaysian Landscape-Water Colour Competitions in 1982 and 1984 respectively. A full time artist since 1991, Yeong’s work is known for her rendering of Malaysian stil-life landscapes that encompassed the likes of plantations, animals and such. 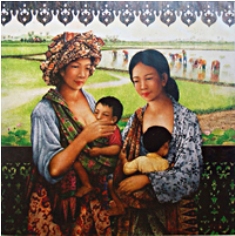 The Ipoh born artist’s achievements in the art scene remains an envy among others where he is one of the founding members of the Penang Water Colour Society while he also initiated the International Chung Ling Art Show in 2002. His works are in the public collections of National Art Gallery, Bank Negara Malaysia, The Dragon Museum of Art in Taiwan, Hong Leong Bank, Malayan Banking Berhad, Philip Morris, United Kingdom as well as in several other countries in Europe and around Asia.

Apart from winning the third prize of the Young Artist Salon Malaysia in 1966, he also won the Malaysia Landscape Water Colour Painting Competition while he also had his solo exhibitions at the Penang State Museum and Art Gallery, British Council, Kuala Lumpur, the Tainan Municipal Centre in Tainan, Taiwan and The Dragon Museum of Art in Kohsiung, Taiwan. Yeong’s works were also involved in various group shows in around the region that includes Taiwan, Thailand, Singapore China, Denmark, Japan and as far as Argentina.