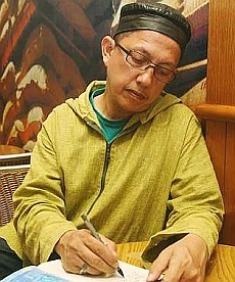 Born in Kulim, Kedah in 1962, Rafiee Ghani is one of Malaysia’s most prominent fine artists where he started learning art at the De Virge Academie Voor Bildeende Kunst at the Hague in the Netherlands before he continued at Institute Teknologi MARA in Dungun. It was in Europe that Rafiee gained his inspiration and exposure in art where he visited all the great spaces and museums. Consequently, Rafiee drew his inspirations through old masters like Vincent Van Gogh and Henri Matisse and their works.

His works are known for their loud and dynamic colours and brush strokes where his Intimism styles are very well established where he is known to produce paintings of still-life that depicts all types of objects of everyday life including the likes of vases, stools, chairs, mugs, flower, food and fruits. Aesthetics form an important part of Rafiee’s paintings where he uses balance and composition to their fullest potential, often producing artwork which are both aesthetically pleasing and artistic. Rafiee was formally trained in the arts and techniques of print-making but it is his mastery in oil painting which sets him apart from other artists where he is known to fully utilize the limited use of colours known in printmaking techniques. As known by many, Rafiee’s artwork produces an imaginary illusion of images and objects which are submerged below his mastery in playing with colours which are vibrantly mixed and integrated. This is where one would be able to clearly see the objects which are portrayed amidst the sea of a strong tone of colour scheme which epitomizes Rafiee’s body of work.

As an artist, Rafiee has been actively involved in shows in both private and public galleries and art spaces around the world. He is a full time artist who takes his art very seriously where among his most recent solo exhibition was the Freedom show held at the Pinkguy Art Gallery. Other notable shows include his “Room of Flowers” in 1993, “The Painted Garden” in 1996 and “Kebun Sultan” in 2002.

Apart from that, Rafiee’s works have been collected by major corporations both within and outside of Malaysia that include Bank Negara Malaysia, Petronas Gallery, Dynasty Hotel, Bank Utama, Malaysian Tobacco Company as well as Oriental Bank. His works are also in the collection of Mr Albert Rene, the President of the Seychelles and several private collections in the United States, Europe and Asia.