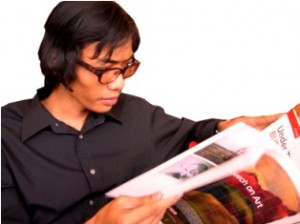 Mohd Ali Azrai Bebti is a Malaysian fine artist and sculptor born in 1985. His reputation began in school when he was pursuing his Diploma in Fine Art at UiTM (Universiti Teknologi Mara) in Malacca where he was in the Dean’s list for 4 consecutive semesters. He was also the student head of the Fine Arts Department in university where he also won the Second Prize at the Khat Art Competition.

Since then, he has been pursuing his passion where his works have been seen around the region as well as around the world. He was involved in the Alyonka Mail Art Project at the Yoshkar-Ola Museum of Fine Arts in Russia, “Harry Potter”, [email protected],La poste Fontenay Aux Roses Cedex in Paris while his works had received Honorable Mention at the “The 1st NBC Tokyo Screen Print Biennial in Tokyo just to name a few.

He was also involved with the Mail Art “Festa Della storia: la storia siamo noi, conosciamoci e conosciamola” and the 1000 Artists Exhibition (1000 ARTISTI A PALAZZO), World Museum both in Italy while on the local front, he was previously involved with shows at the Johor Art Gallery, the ‘Potret Merdeka’ show organized at the National Art Gallery as well as in numerous other shows with prestigious galleries around Malaysia.

As a prominent sculptor, Mohd Ali Azraie Bebit’s work has travelled around the country, the region and the world. His works are edgy, thought provoking and very interesting. As seen in the sculpture ‘Parasit’, Azraie uses the material to build a structure that is seen as ‘walking’ or having a foot up while exuding the elements of a robot which is supposed to be rigid. The connection of a robot with the title is a conundrum as robots are known to have no emotions while a parasite is set to come with ulterior intentions and this represents a paradox to a certain extent.

In Rangkaian Suara, Azraie move away from the usual chromatic and more monotonous colour nature of sculptures and this is where he has injected a bit more colours into the work. It is a highly creative piece where a microphone is used to depict the voice while the foot of the structure is painted with a few colours. This can be seen as a way of projected the multi-faceted nature of how sound can be represented and perceived. It is like a speaker set which projects the sound through the box but is held up by a somewhat flimsy stand.