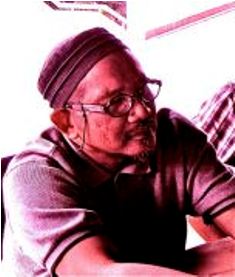 Nasir Baharuddin is one of the artists in Malaysia where his works are known to be of a minimalist culture. He is known to have used shapes and points to convey his perception of social issues which are schematic in many ways and forming a revolutionary of producing art for the viewers. In many ways, Baharuddin’s artwok is seen as very geometric and schematic because the objects and forms that he uses seemed to be articulately and accurately measured to perfection and then ‘imprinted’ onto the canvas.

Nasir graduated with a Bachelor in Fine Art from the Mara Technology University in Shah Alam (UiTM) in 1985. In 1993 he obtained his Master in Fine Art from the Savannah College of Art and Design in Georgia in the United States of America. Since then, he has been actively working in the art scene, producing works that establish himself as a serious artist in the Malaysian sector. He is known to be an explorative artist who is not afraid of taking risks and this can be clearly seen with his artwork which seemed to be visually appealing and very much distinguished among the many other artists who are more involved with abstract paintings and technique based works.

Nasir Baharuddin has made his art known in many public and private art spaces around the region. Apart from that, he has garnered awards and accolades which puts him on the world map of artists. In 2002, he obtained the Travel Grant to Hungary which was awarded by the Singapore Art Museum and The Association of South East Asean Nations, Committee on Culture and Information (ASEAN COCI) while he was also one of the few artists whose work received Honourable Mention at the 1994 Philip Morris ASEAN Art Awards. A year before that, he took home the Merit Award at the 15th Annual Arts on the River at the Savannah College of Art and Design while it he is also in the National Dean’s List of the college in 1992 and 1991.

Among his exhibitions are the “Land of Grace” show held by Galeri Chandan in Kuala Lumpur. He was also involved with the “Art Education Program in Conjunction with DOCUMENTA 12” in 2007 in Kassel, Germany while his work was also part of the 2002’s “36 Ideas from Asia – Contemporary Southeast Asean Art Exhibition” held around the European countries of Hungary, Germany, Austria and Italy. Apart from that, his work was also put on show at the “Malaysian Contemporary Art in Prague” at the prestigious Manes Gallery in the Czech Republic.