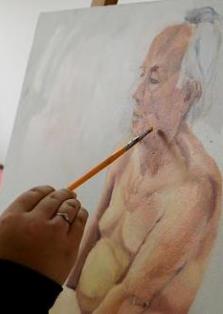 Wang Xuzong, an 84-year old man became a media sensation in China and around the art scene when he was reportedly disowned by his own children in the name of art. This was because he took up a new job by posing nude for young art students in their pursuit of their art courses.

Wang believes that what he is doing was a noble profession as he was earning a proper salary. His wife died 15 years ago while he had in 2007, lost his youngest son. Since then, he has been living by himself with a monthly pension of 800 yuan or roughly around RM400 per month. His oldest son would visit him once every week to bring him some food and clean clothes while his other 2 daughters would visit him once a month which leaves the old man pretty lonely  and alone at times.

Apart from that, he pretty much has nothing to do and posing nude would earn him about 60 to 100 yuan per hour which is about RM30 to RM50. What he needs to do is to hold a naked post for 45 minutes in front of a group of students and for doing so, his children has reportedly wanting nothing to do with him anymore. His new job now brings him about 1,400 Yuan (RM700) monthly and he said that it is a career that deserves respect. In fact, he has not been happier doing something which was reportedly a growing norm among senior citizens in China.