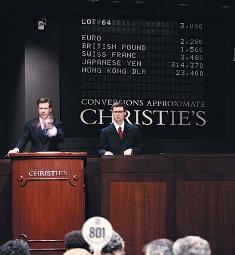 The old saying that art is universal surely has its elements. It has been reported that the contemporary art market of the world is staying strong despite the global economic slowdown. According to Artprice, the 2011/2012 auction has recorded the third highest in history.

According to Thierry Ehrmann, the chairman and founder of Artprice, against the backdrop of an economy crisis, the resistance shown in the contemporary art market is strong and very resilient. Between June 2011 and June 2012, there was a 6% decline of auction sales of art. Last year, the totle receipts was at €860 million or RM3.4 billion while the year before that was at €915 million.

Artprice keeps the largest database of the contemporary art market in the world and despite the drop, it was nothing to be alarmed about because the overall result was the third highest in its annual report that recorded the sale of artwork of artists born after 1945 at auctions. In the report, it was also announced that Asia makes up 43% of the total while Europe is slightly lower than 30% making Asia the largest contributors to this market.

As reported before, China who was in third place a year ago is the highest this time around which contributes 38.8% of revenues through auctions. Meanwhile, the United States contributes 26.1% of the revenue while Britain holds 22.6%. This gap is then largely widened where France only contributed 2.5% even at the fourth spot with revenue no longer recorded from the few major auction houses in the world but also from the new ones in Beijing and Shanghai.