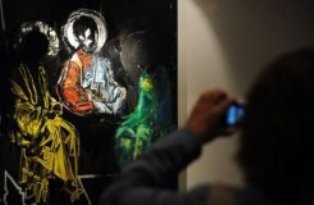 An art exhibition dedicated to the punk rock band Pussy Riot in Moscow was met with protests by supported of the Russian Orthodox Church recently. The name of the show was ‘Spiritual Battle’ which was to be held at the Winzavod Centre of Contemporary Art in which some 20 protestors blocked access into its premises.

The art exhibition was organized by Yevgeniya Maltseva, a Russian artist which had controversially painted 10 pieces of artwork that depicted religious icons and some hooded figures who resembled members of the Pussy Riot band. The protestors had threatened to disrupt the event but Viktor Bodarenko, one of the organisers said that there was no ill-intent on the show.

The protestors however had other ideas where one said that the art was an insult to the basic values of the country. Pussy Riot has been in the news lately for all the wrong reasons when 3 members of the band were jailed by a Moscow court. They were alleged to have been responsible for cuasing hooliganism motivated by religious hatred and subsequently slapped with a 2 years labour camp sentence.

Since then, calls to ‘Free Pussy Riot’ ahs hit the airwaves. A performance by the band in February at the Church of Christ the Saviour in Moscow saw them controversially called on the Holy Virgin to drive the Russian President Vladimir Putin from power through their ‘punk prayer’ session. The act was deemed ‘blasphemous’ by Russian Orthodox Patriarch Kirill who is a self-confessed ally of Putin himself.