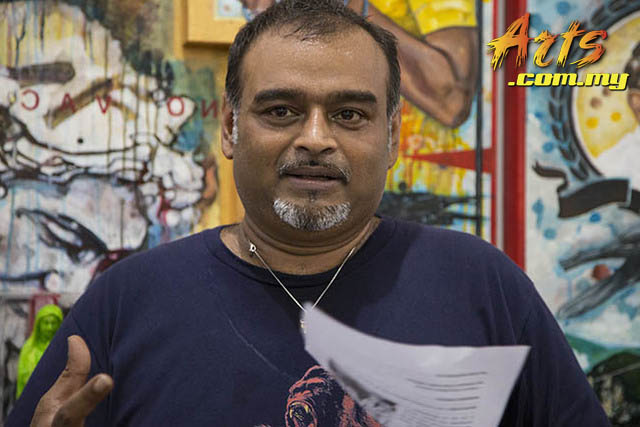 Anurendra Jegadeva’s Profile: Anurendra Jegadeva known by many as Anu is one of the most established Malaysian contemporary artists in recent times. He holds a Foundation in Art and Design at the Oxford Polytechnic from the United Kingdom before completing his LLB (Hons) at the London University in 1993. He then continued his Master in Fine Arts at the Monash University in Australia in 2002.

Anu’s work is known to depict a lot of traditional and cultural elements from his background and experience. Anu was based in Melbourne for 7 years where he was pursuing his postgraduate course while being actively involved with the university gallery. Anu was previously writing on art with The Star for 20 years and despite holding a degree in law is now a full time artist, a passion he has had since young. Hence, once can always sense his narrative-ness in his work which he drew from his years in journalism.

Exhibitions and awards: Anurendra Jegadeva’s (Anu) artwork has been exhibited around the public and private galleries around Malaysia and the region. While one will always see his exhibitions in renowned galleries like Valentine Willie Fine Art that include his solo show of ‘Headresses’ and ‘Melancholic Mantras’, he also previously had a solo exhibition entitled “Conditional Love, Painted Stories by Anurendra Jegadeva” with Wei-Ling Gallery. His work was also seen at the ‘Women and Elections’ at the Grafton Street Gallery in the United Kindgdom while ‘Migrant Adventures – People, Places and Assorted Things’ were seen at the Australian High Commission in Kuala Lumpur.

He was also recently involved with a group show entitled ‘Tiger Show’ at Wei-Ling Gallery as well as the space’s 18 @ 8 shows. His work travelled to Beijing in China at the CIGE, China International Gallery Exposition in 2008 as well as at the WWF Art Exhibition in Rimbun Dahan. Other notable galleries include the Platform Gallery in Melbourne, the National Art Gallery and the Galeri Petronas in Suria KLCC.