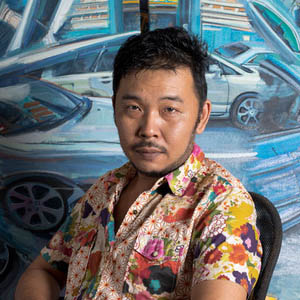 Chin Kong Yee’s Profile: Born in 1973, Chin Kong Yee’s artwork is easily distinguishable among the crowded fine artists of Malaysia. This is because he exudes the “bird’s eye view” in his work which in many ways seemed like a panoramic view of his objects. His artistic style is labelled as ‘AAP’ or Actuality Accorded Painting. This style has pretty much became his trademark and unique style that very much exude his originality and persona in his art.

His artwork is known to be derived from the philosophy that nothing is ever stagnant where everything is constantly changing and evolving. Invoking surrealism whenever possible, Kong Yee’s work depicts his work in 2 main perspectives, namely realistic and unrealistic that combines the present, the past and the future. A graduate of the Central Academy of Art of Kuala Lumpur, his work has firmly establish him as one of the leading contemporary artists of his time and in the country where they have been seen in most public and private spaces nationwide.

Exhibitions and awards: Chin Kong Yee’s artwork has been exhibited in around private and public galleries around Malaysia. He was also invited to be the Artist-In-Residence at the Pangkor Laut Resort as well as Tanjung Jara Resort for 2004 and 2002 respectively. The programmes were sponsored by YTL Hotels and Properties while he also conducted workshops at the Cluj-Napoca Art Museum in Romania in 2004.

He also has had major solo exhibitions including ‘Undulating Spaces’ and ‘Cerulean Skies’ with Townhouse gallery while recently ‘Reality in Wonderland’ was held at Wei-Ling gallery (2009). Among his group exhibitions include the “Chinese National Gallery Exposition” held at the Chinese World Trade Centre in Beijing, the [email protected] Vice and Virtue show at Wei-Ling Gallery, the “Ausstellung : zweihundertzaeiundsiebzigeinhalbstunden un mehr” at Germany’s Galerie Tanner as well as the “East-West Contemporaries” show at Romania’s Cluj-Napoca Art Museum. He also exhibited his work at the “SEOUL International Stars Exhibition” in Seoul while having his work showcased at Metro Fine Art and the National Art Gallery respectively.