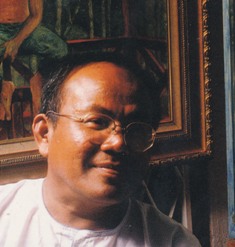 Dr Zakaria Ali is a Malaysian artist who is also a scholar in the arts. He is currently the Professor Madtya in the School of Art in Universiti Sains Malaysia in Penang. Born in Kampung Batu in Rembau, Negeri Sembilan in 1946, Dr Zakaria is very actively involved in the development of Malaysian arts and culture where he is known for his paintings while he is also a very popular writer.

Dr Zakaria is a very respective writer in literature and poems where he obtained his early schooling years in Johor Bahru. He would then continue on at the Undang Rembau English School before heading to Southwestern University in Georgetown, Texas where he obtained his Bachelor in Fine Arts degree. After that, he continued at the Stephen F. Austin State University in Nacogdoches, Texas where he completed his Masters degree. He would then further enhance his academic qualifications when he completed his Masters in Art History at the Universidad de las Americas in Puebla, Mexico. Dr Zakaria then completed his PhD in 1991 at Harvard University.

Dr Zakaria’s artistic talents have flourished through 2 areas namely literature and paintings. His literature works encompassed all types of writing disciplines that include essays, journals, novels and poems while as an artist, he has been actively involved in the area of fine arts.

Dr Zakaria was once a curator at the Pesta Pekan Seni in Ipoh while his works have been exhibited around the world ever since. Among some of his notable solo shows include the “Mexico: Impressions and Memories” show held at the Universiti Sains Malaysia Museum and Art Gallery and the “Dr.Zakaria Ali Retrospective” show at The Art Gallery in Bellisa Row, Penang. Apart from that, Dr Zakaria’s works were also involved in group exhibitions since 1975 where he was involved in the Instituto de Relaciones Cultural Mexico Norte Americanos in Mexico City, the “Pertama IV” (Ismail Abdullah, Baharudin Arus, Mohd. Najib Ahmad Dawa), The Creative Center show organized by the National Art Gallery in Kuala Lumpur, the “Cita Rasa Malaysia Indah” show at the Bank Negara Malaysia and many more. Apart from that, his literary achievements were also very well received where he wrote various books published by Dewan Bahasa dan Pustaka. His poems were also published and used while his most notable novel is ‘Empangan’ and ‘Villa Maya’ while Utusan Publications and Distributors published his book ‘The Warmth of Green: Essays on Modern Malaysian Art’.