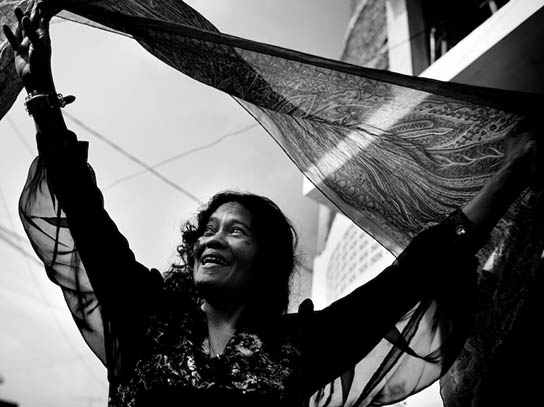 Nur sings her heart out loud while walking around Muhyiddin's house in Sukabumi as she express how good she felt to be able to step foot on Indonesian land to me.

Rahman Roslan is a Kuala Lumpur based Malaysian photographer who is known for his artistic perspective in his work. He is known to be one of the few young and emerging photographers who has been able to exude art in this media from Asia. Born in 1985, Roslan is one of the youngest and most recent artist of his time whose work has been used and printed in major publications not only in the region but throughout the world over. Currently a fulltime artist and documentary photographer, Rahman epitomizes what a photojournalist should be where he let his work tells the story and convey the message.

He is known for his cognitive style and sensitivity to the subject matter where one can easily be engaged when viewing his photographs. With the emerging interest and overcrowding of commercial photographers in the market, Rahman remains as one of the few who take photography as an art and does so very successfully. His work was so recognized and acknowledged that he was among the few privileged ones chosen to attend the Angkor Photography Festival’s prestigious free workshop. Rahman is known to take photography very seriously which is why his works are viewed with much appreciation and is constantly sought after by galleries for exhibitions and art shows

Awards and past works by Rahman Roslan

Rahman Roslan is what one could call an artistic photographer because his art is perceived as commercial enough to be published and yet artistic enough to be collected. His photos have been selected by major publications from the international media like Reuters, Agence French Press, European Press Agency, New York Times, International Herald Tribune, TIME magazine, TIME.com, La Repubblica, China Daily, The New Internationalist, Berita Harian Singapore as well as Strait Times Singapore. Such a profile will surely propel Rahman’s portfolio into becoming one of the most popular photographers from Asia in the coming years.

As a photojournalist, his works are also used by UNESCO Korea where he has provided freelance services for major news syndicates. His work was recently selected and he was a finalist at the 2011 Anthropographia Human Rights Award while he was also involved in the Nikon Asia’s Emerging Photographers campaign 2011. A year before that, he was featured in Visual Magazine of Indonesia’s emerging photographer section. Rahman was also a finalist at the REDUX / FOUNDRY workshop scholarship while he was also featured as an emerging talent in Ojodepez. Other notable awards that Rahman was selected include the Emerging Talent Award Foundry 2009 in India while he was also featured at the Asian Geographic Annual 2009 Photo annual previously.