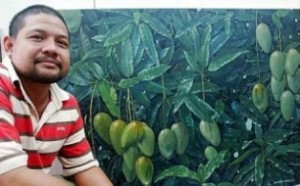 Zaharuddin Sarbini: Zaharuddin Sarbini is a Malaysian fine artist who was born from Sekinchan in Selangor in 1966. He is a graduate in Mechanical Engineering from the University of Technology Malaysia. However, due to his interest in art since childhood, he has ventured into this area and is popularly known to use fruits in his paintings. Zaharuddin has come a long way as an artist and he has since held numerous shows while also winning awards along the way.

In 1966, he took home the Initiative Young Artist Award given by the Shah Alam Gallery while in 1997, his work received Honourable Mention from the National Art Gallery. A year after that, his ‘Jambu Air’ work took home the Painting of the Year award where it then travelled to London and Paris to be showcased. Apart from hat, he has also been involved with numerous shows like the Open Shows at the Galeri Shah Alam numerous times as well as in the Philip Morris Asean Art Award competition. His works were also exhibited at the APS Exhibition at the Petronas Galeri while in 2000, he was involved with the Bank Negara Malaysia organized ‘Malaysia Tanahairku’ show as well as the ‘National Dary Art Exhibition’ at the City Art Gallery

As Zaharuddin Sarbini is known, his still life paintings are one of the most exemplary in the art scene. In fact, he paints fruits so well, it is often hard to fault him for continuing to do so. In the painting above, entitled ‘Belimbing’, the object of star fruit is used and springs into life so well by Zaharuddin that one cannot but be compelled to be impressed enuogh to want to pick them off the tree. This painting style requires years of pratice and the use of light colours to show the shading and balance of the painting is fundamentally shown.

In Zaharuddin’s Kingfisher painting, this is where he deviates from his nickname of the ‘fruit’ artist. It is in paintings like these that one can view his works in a different light. In fact, Zaharuddin took a risk here by moving away from fruits and then projecting his technique into still life. The Kingfisher bird is seen in clarity here among the still waters of the background. The scenery in itself is a beauty to behold and hence, with the bird as the focal point, the serenity of the situation is clearly portrayed. It cannot be more peaceful than this.