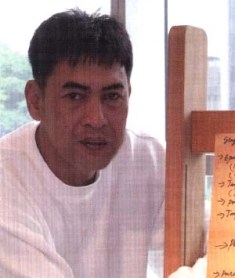 Zulkifli Yusoff is one of Malaysia’s most established contemporary artists. He first took notice of art when his father gave him a copy of Art Today back in 1979. Since then, his passion in the arts grew by leaps and bounds where he will then continue to set a career in the discipline. Zulkifli is known to be a very versatile and explorative artist where he has worked in various types of mediums that encompasses painting as well as with sculptures. Apart from that, Zulkifli is also known for his installation pieces.

Zulkifli’s early art training came thorugh from the MARA Institute of Technology in Shah Alam where he graduated with a Diploma in Fine Art from the School of Art and Design. He will then continue to pursue his degree in the United Kingdom at the Manchester Polytechnic’s Faculty of Art and Design before setting out to establish his name in the Malaysian art scene.

As an artist, Zulkifli has been actively involved with shows and exhibitions which further enhanced his reputation as one of the leading contemporary artists from Malaysia. He started in 1987, where his works were seen at various art spaces like the Australian High Commision and the Shang-ri La Hotel in Kuala Lumpur as well as at the Kedah State Gallery.

He will then continue to exhibit his works at the National Art Gallery and other spaces like Club Mediterranean in Cherating beach in Pahang while his sculptures were showcased at the 6th International Sand Sculpture Competition in Hong Kong where he took home the Second Prize. Among his other significant achievements as an artist is when he won the Major Award at the Young Contemporaries organized by the National Art Gallery, the Grand Ministers Prize at the 3rd Salon Exhibition as well as garnering the Honorable Mention at the Philip Morris Asian Art Award.

Apart from that, Zulkifli’s work have also travelled to various parts of the world where they have been seen in Japan at the Fukuoka Asian Art Exhibition, the MAFA Show in Righton Gallery and the MA Show at Holden Gallery in Manchester, the Biennial of Visual Arts of Seychelles as well as in Australia at The First Asia-Pacific Triennial of Contemporary Art in Brisbane and the Immunuty 11 show at Art Space Sydney. His works are also in the permanent collections of major corporations like Bank Negara Malaysia, the Singapore Muzeum and Gallery, the Kedah State Gallery as well as in the Fukuoka Muzeum of Art Japan and Hiroshima Art Muzeum.