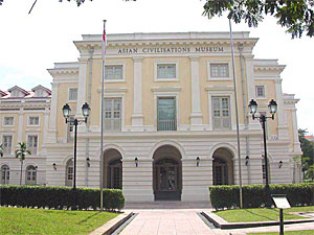 The Asian Civilisations Museum (ACM) in Singapore is currently holding 2 very unique exhibitions which are somehow connected to Malaysia in many ways. The first one is an exhibition entitled ‘Treasures of the Aga Khan Museum: Architecture in Islamic Arts’ which was previously seen in Kuala Lumpur’s Islamic Art Museum as well as in other cities like St Petersburg. Basically, the exhibitions encircles around the area of Islamic art which have been a popular genre in recent years and has often been the least studied and understood.
The Aga Khan Exhibition has been one of the most popular Islamic art showcase that have awed the world over which displays some of the treasures and artefacts created by Prince Karim Aga Khan IV, a spiritual leader of the Ismaili Muslim group. There are hundreds of objects that are sourced from countries like Iran, Egypt and Spain that depict not only the arts but the unique and beautiful architecture of its era. The exhibition is held at the Special Exhibitions Gallery which will run until 28th October 2012.

The second exhibition is entitled ‘Islamic Arts from Southeast Asia’: Highlights of the Asian Civilisations Museum’. This would be an interesting show that will showcase the exclusive collection of ACM and will involve artefacts like calligraphy, tomb markers and religious literature like the Qu’rans and other Islamic art forms form the region that include Chinese porcelain as well which will be running until 20th January 2013 at Gallery 2 of the ACM Empress Place.