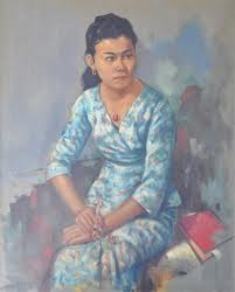 The beautiful woman that was painted by the late Datuk Mohd Hossein Enas is actually Zoebaidah Hoessein, the artist’s daughter. The painting was completed more than 50 years ago and today remains as one of the most recognizable paintings by a Malaysian artist in history.

The painting is entitled ‘Portrait of Zoebaidah’ and was painted a year after independence in 1958 and she was only 17 then. In an interview published recently, she said that she was still in school and was preparing for an examination. Her late father, Datuk Mohd Hossein then called her as he wanted to paint a portrait of her.

She told her father that she wanted to study with which her father then asked her to bring her pen and book and put on a traditional wear. She then wore the baju raya for that year and wore necklace that her mother had given to her. The 71 year old woman said that she her father asked her to just sit there and he would paint her. That session only lasted 30 minutes as she became restless. The same process would then go on for days until the painting was completed. She would then later get married and moved homes, in which she brought the highly sentimental painting with her each time she relocated.
She is currently involved with charity work with the Spastic Children Association of Selangor and Federal Territory with fundraising events and related programmes for the less fortunate children. The painting was recently auctioned at the Malaysian and Indonesian Modern and Contemporary Art Auction 2012 and Zoebaidah believes that while she cherishes the painting, she knows that someone else will be able to look after it and admire her father’s masterpiece for a longer time than keeping it with her.