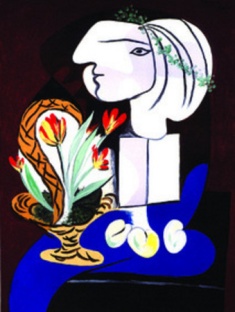 International art and antique auctioneers Christie’s and Sotheby’s are expected to put 2 masterpieces under the hammers respectively next month. One would be the 1932 portrait by Pablo Picasso entitled ‘Nature Morte aux tulipes’ and another is by pop art icon Andy Warhol’s ‘Statue of Liberty’ and they are both expected to be auctioned off for at least USD$35 million each or RM106 million.

That would be the expected figure although they could be higher. The painting by Picasso will be sold off on November 5 by Sotheby’s where the pre-sale estimate is from USD$35 million and could be up to USD$50 million. The oil on canvas piece was done in March 1932 where it is one of the few renderings of Marie-Therese Walter, Picasso’s muse and has been widely considered to be one of his most important paintings. According to experts, this painting is among his works where he first built a sculpture of Marie-Therese and painted her. There will also be another painting entitled ‘Femme a la fenetre’ which comes with a pre-sale price tag of USD$20million.

On November 14, Christie’s will be having their own session in which the highlight of their auction would be the ‘Statue of Liberty’ by Andy Warhol which essentially is the artist’s own experimentation of a 3-dimensional projection. This is also seen as one of his most significant paintings which stands alongside Warhol’s other iconic works like the Campbell soup-cans, the Coca-Cola bottle, Elvis Presley and Marilyn Monroe which all depicted the American Dream.