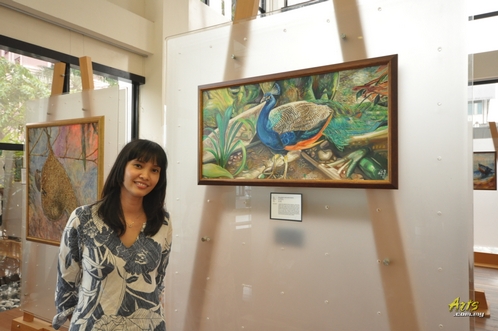 Hanim Hassan is one of the most exciting Malaysian artists in recent years. Where most artists have continued the tradition of conventional art with painting of oil and the usual subject matter, Hanim has been working relentlessly to bring her passion onto the art scene of Malaysia.

Hamidah Hanim binti Hassan was born in 1980 in Kuala Lumpur where she grew up in the southern state of Johor. The mother of one is married to Asrul Affendy bin Dato’ Houd. She studied at the Sultan Ibrahim Girls’ School and then continued to venture into her passion in design where she obtained her Diploma in Advertising and Graphic Design at The One Academy of Communication Design before venturing into another area with Limkokwing University of Creative Technology in which she completed her Diploma in Industrial (Product) Design.

Before painting full-time, Hanim has worked in the industry where she brings with her years of Graphic Designing experience and since she got married, she has continued to practice as a freelance graphic designer. In 2011, she ventured into a leap of faith where she went full-time, immersing into her art and produced some of the most compelling artwork in recent years.

1
Hanim’s body of work is very unique and original as they differ from the conventional art that are seen around the industry today. This is mainly due to her years of experience in graphic design and her own traditional values. A certain shade of oil strokes creates the right impression of her work like that was seen in her 2010 ‘Kemasik Fishing Boats on the Seashore’.

It is in the interplay of colours that Hanim injects into her oil paintings that makes them special. One cannot but to associate the oil strokes, which is her preferred medium to the techniques of Claude Monet’s ‘The White Water Lilies’ but with a more current and contemporary touch to them. Another painting entitled ‘Perhentian Pagi’ is perhaps the best testimony of Hanim’s exemplary techniques.

In 2012, Hanim had her first solo exhibition entitled ‘Anugerah Sentuhan Sepi oleh Hanim Hassan (A Quiet Touch by Hanim Hassan)’ at the NSTP Gallery Bangsar which will surely be the start of many more to come.
As an artist, Hanim works hard and never rests on her laurels where she is always learning new techniques while enhancing her current ones. She continuously works on her art and is known to be a strong supporter of the performing arts. She is currently involved in some productions and would be involved in events with some of the prominent performing arts centres in the country.
However, it must be noted that as an emerging artist, Hanim is surely moving towards the right direction especially with her techniques that have been well-perfected that places her among the best in the art scene today. With hardwork, a unique body of work and an excellent personality with a strong vision of the future, Hanim surely will become a renowned artist in the near future not only within Malaysia but also in the region as well.