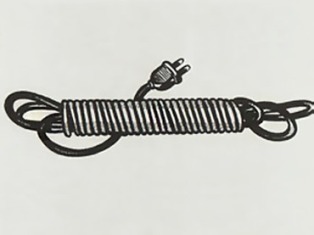 The FBI (Federal Bureau of Investigation) has reported that a painting by pop art icon Roy Lichtenstein titled ‘Electric Cord’, which was reported missing 42 years ago was returned to its original owner. The painting, which is reported to be worth USD$4million was reported missing by Leo Castelli, a celebrated art dealer in the 1960s when he acquired the painting and put in up at his New York Gallery then. However, after he sent it to art restorer Daniel Goldreyer for cleaning in 1970, it went missing.

It was not until July this year that the painting re-appeared at a New York storage facility. Apparently, the facility had received it through an art gallery in Bogota which was consigned to sell the painting by Goldreye’s widow who said that she was asked to sell it on his behalf by a friend of her late husband. Since it came under the spotlight, she has relinquished all claims on the piece and that it will be returned to Barbara Bertozzi Castelli, the wife of the late Castelli who will be hanging it in her apartment from now on.

Mary Galligan from the FBI’s New York office said that it was justice served with the return of the masterpiece to its rightful owner although it has been so many years overdue. A retrospective exhibition is currently being held at the National Gallery of Art in Washington D.C which showcases some of his most remarkable and compelling work since he passed away about 15 years back.